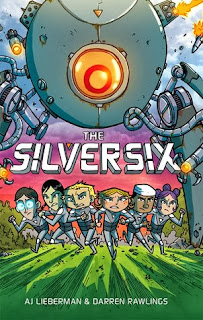 Six orphans discover they have something in common: their parents left them a moon. When they attempt to move to their moon and live out their lives in peace, the corporation their late parents worked for attempts to steal it from them. The kids band together and fight back against the monstrous machines sent to take their moon from them.

The illustrations in this book are really engaging, and kids love stories about orphans. The adventure is nonstop, and the futuristic setting is a lot of fun. There's also an element of mystery as the kids try to figure out the messages their parents have left for them. This book is very popular with my graphic novel fans as well as my fans of adventure books.