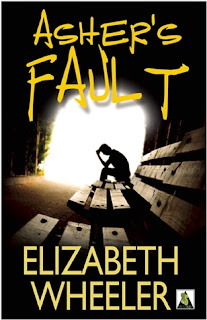 Asher is hiding in a bathroom, having his first kiss, when his little brother drowns.  After that, Asher has to deal with his grief, his parents' separation, and a whole lot of secrets that are being revealed.

I liked that, like Coda, this is a book about a character who happens to be LGBT, but the book isn't really about the kid coming out.  Instead, he's trying to deal with his little brother's death, his mother's grief, his jerkweasel "friend," and all the twisted secrets that come out about his family.  I liked that Asher had his old-fashioned camera and that he enjoyed using it, but didn't like taking pictures of people.  The story kept me going even though Asher's friend is irritating to the point that I wanted to punch him and Asher's dad tries to buy his love.

Recommended for: teens, fans of mysteries,

I received a complimentary copy of this book through Netgalley for the purposes of review.
Posted by Jenni Frencham at 12:00 AM