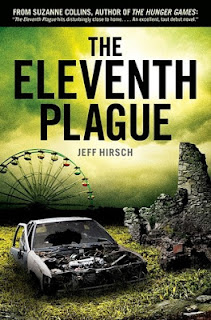 Most of the world's population has died from P11, a stain of influenza that swept across the world like a plague. Stephen and his family are traders; they scavenge old buildings for useful items and bring them to big trading events. Stephen has been raised to mistrust outsiders and to avoid populated areas.

But when his father is critically injured and some people offer to help him, Stephen has nowhere else to turn. While his father lies in a coma, Stephen gets a taste of life in a town. But he's still not sure if he should settle down or head out on his own.

I listened to the audio version of this book. The narrator isn't bad, and the storyline is interesting enough. Also, the narrative is fairly fast-paced, so the book held my interest while I was driving. I didn't love it, but I liked it. Then I got to the epilogue.

An epilogue is only supposed to be a couple of pages, just to update the reader on what happened to the characters one year, five years, or ten years after the end of the story. My fiancee and I listened to the epilogue while we were waiting for a table at a restaurant, and we eventually had to turn it off and go inside because we'd been listening for thirty minutes. The first part of the epilogue was good, but then it seemed like the author decided he wasn't really done with the story and it just kept going and going and going. Overall, though, it's a good book. Probably even better if you skip the epilogue.