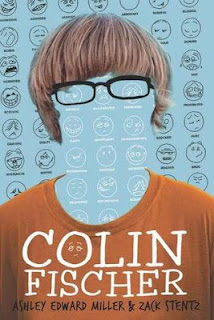 Colin Fischer is starting high school, and for the first time in his educational career, he is walking the halls without an aide. Colin is being mainstreamed into regular classes, and he's armed with his trusty Notebook and his emotions flashcards.  Colin has Asperger's Syndrome.

Near the beginning of the school year there's an incident in the cafeteria - a student brings a gun to school and the gun goes off in the cafeteria, although no one is injured.  The police blame the one student thought most likely to bring a gun, but Colin is convinced that this person is innocent, and he goes about proving it to everyone else.

It seems that books about people with Asperger's are fairly popular recently.  This book is a good one, and I enjoyed reading it and getting into Colin's head as well as watching the reactions of those around him. I would recommend this book to people who enjoyed other books about people on the autism spectrum, such as Rules, Perfect Escape, and Scary Scene in a Scary Movie.
Posted by Jenni Frencham at 9:00 PM