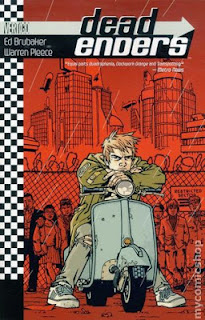 From Goodreads: "In this stylized book of mystery and science fiction, a drug-dealing car thief must discover the secret behind his visions in order to save the world. Twenty years after the devastating Cataclysm, society has been separated into sectors in which the rich are able to enjoy machine-generated weather and sunlight while the poor are forced to live an eternally dank and dark existence. Banished to the dismal Sector 5, the angst-ridden Beezer discovers that the corrupt city police are hunting him because of his experiential visions of a pre-apocalyptic world. Now Earth's reluctant savior must learn his true origin and the meaning of his visions before he is captured and killed."

Blech. I really didn't like this one.  There's a binary world like in the Hunger Games (really poor people and really rich people), and it's been forced to be like this because people have been placed into this Matrix-esque machine that keeps things separated. A poor kid (who's also a drug dealer) and a rich girl are some of the people who have visions and are chosen to go in the weird machine thing.  But they find out the secrets and then they stop the machine and restore the balance (hopefully; the ending is a bit ambiguous).

This story was just depressing and not interesting to me at all. Maybe it was the angsty teen that was a problem; it took me a long time to enjoy the fifth Harry Potter book for that reason, too.  I didn't even particularly like the art in this book, although I had classmates who really enjoyed both the art and the story.  This novel is actually a collection of serial comics, so it might have been more enjoyable if I read it in several sittings, instead of sitting down and reading it straight through.  I would recommend this book for older teens or adults who are interested in dystopias or post-apocalyptic works.

UPDATE: My graphic novels professor informed our class that this book mirrors a lot of the Mod culture from postwar Britain.  So some people may be interested in this book because of that.  I think that information may have helped me understand the scooter obsession a bit, but I still don't particularly  care for this book.
Posted by Jenni Frencham at 9:00 PM