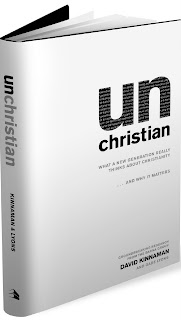 Kinnaman, David and Gabe Lyons. unChristian: What a New Generation Really Thinks About Christianity and Why It Matters. Grand Rapids: Baker Books, 2007.

I can sum up this book in one word: wow.  The basic idea behind this book is this: scores of young people (ages 18-30) are leaving the church or are turned off by Christianity, and the authors wanted to know why.  This book is a culmination of years of study and thousands of surveys conducted both of people within and outside of the church.  The news isn't pretty.

Many Busters (my generation - people in their late twenties and thirties) and Mosaics (people in their late teens and twenties) are completely turned off to the idea of Christianity because of things they see in Christians around them.  The scariest part of this survey was the discovery that many people within the church, those who can claim status as committed Christians and who are truly "born again," agreed with their non-Christian counterparts.  The problems in the church are so widespread and so rampant that even believers see these problems.

The bottom line: as Christians, our testimony has become an anti-testimony.  Instead of inviting people to Christ, we are pushing them away. The authors explore six main issues that turn people away from Christianity and suggest alternative perceptions the church should pursue.

What needs to be said about this book will not fit in one post alone.  I will be continuing my discussion of this book, including detailing the six issues and their solutions, in later posts.  For now, though, if you are reading this, please step away from your computer, head to your local library or bookstore, and pick up this book.  This problem simply cannot be ignored.
Posted by Jenni Frencham at 9:26 AM