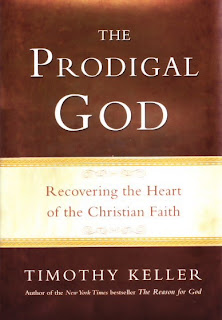 Many of us are familiar with the story of the prodigal son as narrated in Luke 15.  This is a beautiful parable of extravagant redemption and a great reminder of the gospel.  In true English-teacher fashion, Keller asks us to remember the audience of this message.  Jesus was speaking not only to the tax-collectors and sinners, the "younger brothers" of His day, but also to the Pharisees, the "older brothers."  This message would have been quite offensive to the law-abiding religious leaders.

Keller also points out the end of the story: the younger brother has been redeemed, restored, and forgiven, but the fate of the older brother is not detailed.  We don't know if he chose to come in to the party and rejoice at the return of his brother or if he decided to continue to snub his father and earn his father's continued displeasure.  Jesus' offer to the Pharisees couldn't be more obvious, and He extends that same offer to us today.

Similar to Christless Christianity, Prodigal God points out the need for the gospel in the life of all people, both those who can see their desperate need of a Savior and those who may think they have it all figured out already.  May we who have been saved by grace alone remember that we are also sanctified by grace alone.
Posted by Jenni Frencham at 8:38 AM