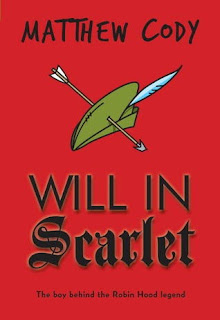 Will has grown up as a privileged son of nobility, but all of that changes when his family's house falls and he is forced to flee into the forest.  There he meets up with a group of bandits known as the Merry Men. His desire to avenge his family's misfortunes at the hands of Sir Guy is nearly his downfall.  Should Will attempt again to murder Sir Guy, or can he make a new life with the bandits and their leader, Rob?

This was a fun and interesting perspective on the Robin Hood story.  It took me a bit to get into this story, but after Will fled into the forest and joined the Merry Men, I was interested to see how the author would fit all of the aspects of the traditional Robin Hood tales into this new story, but I enjoyed watching how everything played out.  This is a fun, action-packed adventure story that will appeal to kids and teens alike.

Red Flags: violence - lots of battle scenes and people being wounded; Rob is a drunk

I received a complimentary copy of this book through NetGalley for the purposes of review.