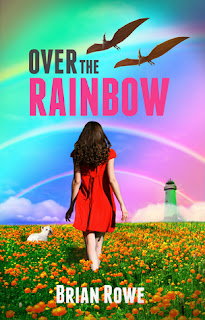 Zippy, a 17-year old from a very religious family, falls in love with a girl, so her father decides to send her off to an ex-gay camp so she can be cured of this disease.  At the airport, Zippy hides in someone else's luggage and sneaks onto an airplane to go meet her girlfriend in Seattle, but the plane crashes and Zippy discovers that most of the passengers are gone. Not dead: gone. Zippy teams up with a few other survivors to try to find her way to Seattle.  Oh, and there are dinosaurs everywhere now.

This book was just weird.  First, it's set in the late 1990's, so Zippy meets her girlfriend over AOL, which gives the book a bit of the You've Got Mail feeling, but without Meg Ryan. Second, when 70% of the people on earth are taken, Zippy and her dad think it's the Rapture, but then they discover that it was just people who were outside or near windows who were taken.  Why didn't they figure that out before?  We don't live on a planet where 70% of the people claim to be Christians, and Zippy's uber-Christian family would have understood that. Then there are the dinosaurs (and other long-extinct creatures). There's no explanation for the appearance of the dinosaurs, and no one seems the least bit bothered by them.  This is never resolved, either.  Everyone seems to be okay with the fact that there are now dinosaurs roaming the mostly uninhabited planet.

Finally, this book tries to be a riff on The Wizard of Oz. Zippy is traveling to "the emerald city" with Frank, Elle, and Mr. Balm.  Frank's got no brain, Mr. Balm's got no heart, and Elle's got no courage. And they have a little dog, too.  So I was expecting at the end of this book to find that maybe Zippy had been discovered in the suitcase after she hit her head, so the rest of the book was just her dream/hallucination, but no such luck.  They get to "the emerald city," Zippy is able to find her true love, and everyone lives happily ever after. With dinosaurs.

This book is so incredibly not worth anyone's time.  We don't get to know any of the characters at all, the plot makes no sense and twists around too much, and the resolution is ridiculous.  Perhaps if one were to be smoking something while reading this, it would be really intense and deep.  As it was, it wasted valuable space on my Kindle.

Recommended for: No one