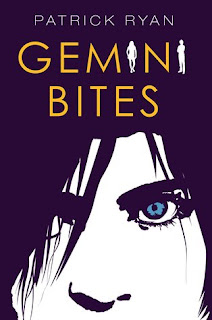 Judy and Kyle are twins in the middle of a nine-member family.  They have been at each other's throats for years, in spite of Judy's recent supposed "conversion" to Christianity.  Then their parents decide to take in one of Judy's and Kyle's classmates, Garret, whose family is moving one month before school gets out.  Garret is a strange boy; he wears nothing but black, changes out his bedroom light bulbs for red ones, and refers to the rest of the family as "mortals."  With both Judy and Kyle crushing on Garret, is there any way this family can be saved?

This was an odd book.  First, we have the Judy/Kyle rivalry.  Judy picks on Kyle constantly and is always competing with him. Then we have Judy's fake conversion to Christianity; she did this to get close to a boy she likes.  Finally, we have Garret. He pretends he's a vampire because his family moves all the time and he's tired of trying to make friends, only to lose them again in a few months or a year when his family moves again.   Toward the end of the story, Judy and Kyle resolve their issues, Judy tells the truth to Bible boy, and Garret tells the truth about his vampirism (or lack thereof).  It had a very after school special-style ending.  Also, Judy's constant meanness to Kyle was grating. I started this book, but almost didn't keep reading because Judy was just. so. evil.  If I were stuck with no other books to read, I might pick this one up, but probably not until then.

Red Flags: Judy has some very unsavory names for Kyle (generally related to his orientation), another boy in the school is a bit mentally unstable and attacks Garret on several occasions