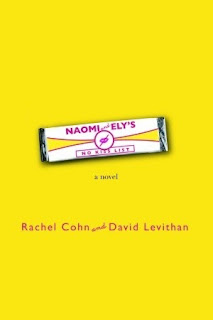 Ely's gay and lives with his lesbian moms. Naomi lives next door to Ely with her mom and dad.  Naomi and Ely have been best friends forever, and they even survived Naomi's dad running off with one of Ely's moms.  They also created a "No Kiss List," a list of people neither of them will kiss so that they can remain friends.  Naomi would love for them to be more than friends, but she knows that's not possible.  But when she sees Ely kiss her boyfriend, it looks like their friendship is over for good.

Although I was intrigued by the title and the storyline, I didn't like this book.  I didn't find either of the main characters sympathetic at all.  Also, I wondered why the authors put the gay boy in the family with two moms, and why Ely had to be such a stereotypical, "I'll sleep with anything I can find" kind of person.  He was having tons of hookups and boyfriends and there was no discussion of him trying to be safe or maybe getting tested for the STD's he'll inevitably have after all of that.  And Naomi was a brat.  By the end of the book, Naomi gets a bit better, and Ely is starting to think about perhaps being more exclusive with his dating, but I still didn't like either of them. I read this book because it is a fairly well-known YA LGBT book, but I don't think I would recommend it to many readers.  Perhaps teens who enjoy books like Gossip Girl might like this one, but it didn't appeal to me.

Recommended for: teens, people who enjoy books about rich kids, fans of books about New York

Red Flags: Lots of drinking and sex in this book. Occasional drug use. No violence.