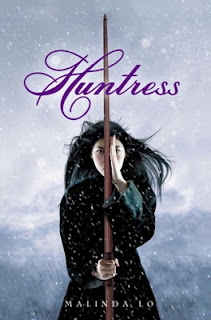 Nature is out of balance in the human world. The sun hasn't shone in years, and crops are failing. Worse yet, strange and hostile creatures have begun to appear. The people's survival hangs in the balance. To solve the crisis, the oracle stones are cast, and Kaede and Taisin, two seventeen-year-old girls, are picked to go on a dangerous and unheard-of journey to Tanlili, the city of the Fairy Queen.

I really enjoyed this story, to the point where I had to force myself to put it down so I could get work done. I loved reading about Kaede and Taisin's blossoming romance, and I really enjoyed the adventure/quest plot line as well.

My only complaint is that after the epic "kill the evil daughter of the fairy queen" scene, Kaede is sent on ANOTHER quest before she can go home. It reminded me of the end of the Lord of the Rings movies, when the screen kept going dark and bringing up yet another scene. But other than that, this was a great book.
Posted by Jenni Frencham at 9:00 PM