I'm glad that I am taking this graphic novels class, as it is definitely forcing me to read things that I am not used to reading.  According to Abbott (1986), I don't even approach a comic panel in the proper order.  Abbott's article contains a description of the way the eyes move on a comic panel: we look first at the picture, then at the narration, then back at the picture and to the dialog, then to the picture again before continuing to the next panel.

My eyes don't do that. I look at all the words first - the narration, then the dialog, then any sound effects, and then I look at the picture to make sense of it all.   In a simple comic, this is not a problem: 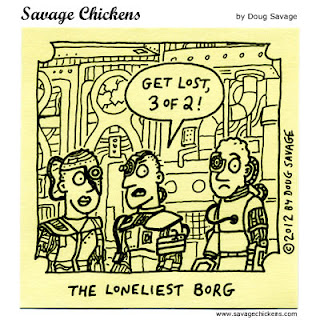 My eyes went to the title, then the dialog, and then I took in the picture.  Since this is a stand-alone panel from a webcomic, I don't suffer any ill effects from reading "wrong." However, most graphic novel panels are part of a series, and when things get more complicated, much can be lost in translation:

In this particular picture, my brain wants to read all of the yellow-boxed text first, then the blue-boxed text.  I have learned that this type of panel is showing a dialog between two characters and that I should alternate panels, but sometimes one character says two things before the second character replies, and then I get confused again.  The end result is that, while I am a very fast reader of print novels, I am a very slow reader of graphic novels.  Sometimes I have to read a page two or three times to figure out exactly what is going on, especially if the panels alternate between the traditional left-right, top-down reading style and throw in a panel that spans two pages.

My other difficulty comes with panels that contain no words - no narration, no dialog, nothing.  My brain has to "write" its own narration so that I can be sure I understand what's going on.  And I don't always read a character's emotions correctly, especially in manga. 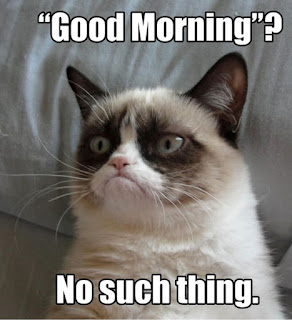 For example, the "grumpy cat" memes don't make sense to me. This cat does not look grumpy; to me, s/he looks like s/he's about to cry.  So when I see a cat that everyone thinks is grumpy and my brain says "sad" instead of grumpy, imagine how complicated a manga can be, when a character's emotions could be demonstrated with a "thought cloud" above their head containing a punctuation mark. [I looked for a decent example of this online and could not find one.]

Perhaps this is why comic books and graphic novels have gotten such a bad rap from teachers, parents, and the like.  A person who does not regularly read graphic works may not understand that it takes a different kind of literacy to understand and read those works; learning to read a comic book is quite different from learning to read a print book.

As I write this, I am watching episode two of the second season of Warehouse 13; the episode deals with comic book superheroes come to life.  The main character who is generally considered more intelligent is not able to help much because she hasn't read comic books; at the beginning of the episode, she teases her partner for having read comic books as though they are "less than;" by the end of the episode it is clear that reading graphic works, while different from reading print works, is still valuable.

It's clear that, as a future public librarian, I need to continue to develop my graphic literacy.
Posted by Jenni Frencham at 9:42 AM

Jenni, I have the same problem! My pattern tends to go in the order of picture first, narration, word bubbles, sound effect, and then overall panel/picture. Most of the time, I don't have much of a problem, but in some of the more complex panels it really can matter.

I think reading a comic book is actually a really personal thing. My reading of a comic book might be drastically different than yours soley based on my past experiences. I guess this is similar to the way any of us can perceive novels, but with the added difficulty of having an image to read, it kind of throws a curveball.

When reading Abbot's article, I actually did read the panel the way he seemed to think was the normal way, but I couldn't help thinking how he got to that conclusion. I'm guessing he probably didn't sit a bunch of people down and say "How do you read this?" and that comics creators don't do that either (but you never know). I think that would be a challenge in sense, trying to anticipate how readers are going to process the panel. I suppose the degree to which this matters would vary.

I was intrigued by the second image you posted. If you had not explained how it was meant to be read, I probably would have spent a few minutes trying to figure it out.

When it comes to reading dialogue, there's a definite right way to read it because the author obviously had an intended way for the conversation to go. I think that in a good comic, the order is obvious because of the layout. Although manga is difficult for me since I'm not used to reading right to left. I guess I need more practice!

As for looking at image vs. words, I don't think one before the other is really important as long as both are taken in. I read the text immediately, but I feel that I am able to take in the image at the same time.

It's good to know that I'm not the only one who's had problems with this. Like you, I tend to read the dialogue/text first.

I hadn't considered the problems of not being able to accurately judge the characters' emotions. Obviously, it would be great if the art were skillful enough to convey the intended emotions, or if the ambiguity of expression helped the text and didn't hinder it, but you can't count on either of those things. I don't remember having that problem as much, but I do remember occasions where a character would get surprising news, and react to it, in the same panel, but combining the "pre-news" and "post-news" expression into one panel called attention to the artificiality of the construction. Their face shouldn't look the same; there should have been a panel switch. It threw me out of the story.