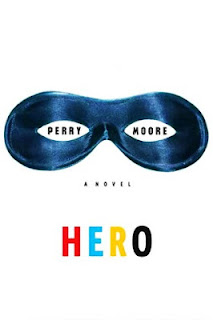 Thom's dad used to be a superhero's sidekick until a tragic accident destroyed his hand and the lives of many people. Now he works in a factory, a nameless employee on an assembly line.

Meanwhile, Thom has realized two things about himself that he absolutely must not tell his father: first, he has superpowers. Second, he's gay.

When the League of Superheroes offers Thom a chance to join them, Thom has to hide his activities from his father while trying to save the world. And he has a bit of a crush on a superhero named Uberman as well.

This was a fun story. I listened to it on audiobook, and often wanted to just sit in the car so I could hear what happened next. Thom is a very believable and likable character, and the superhero adventures were exciting to read. This book's a keeper.
Posted by Jenni Frencham at 9:00 PM