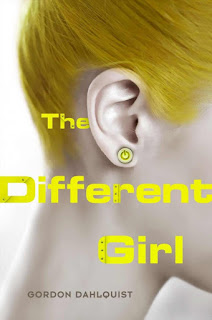 In the beginning of this book, the reader is introduced to four girls, identical except for hair color, who live on an island with a man and woman who adopted them. They only know that the plane they were on with their parents crashed on the island, and the man and woman have been raising them. Later on, another girl washes ashore. But she's different from the first four. The original four try to figure out why she's so different from them.

This book had a lot of potential - I would have enjoyed the story if things had been altered a bit. If we had overheard the humans talking or read some of their data entries or had been given some confirmation of what we were sure we knew - that the girls were robots or androids. But we don't get that. We don't know why they were created, why someone shot down their plane, who these people are who are raising them, why they stayed on the island, why the girl who crashes there has crashed or where she's from or why she thinks the android girls are scary.

It's interesting to have a book narrated from the point of view of an android, but there's too much information that's left out, and I had more questions than answers by the end of the book. A great idea, but quite unsatisfying.