In order to better serve the older kids in our library, I recently started two book clubs. I modeled them after some awesome book clubs that are happening at a library where I interned in Indiana.

I have two book clubs.  The younger group, the BookMunchers, is for 5-8 year olds, and we generally read picture books, although I have a couple of (very short) chapter-ish books on the list.  This month we read Lemony Snickett's The Dark. I really love Jon Klassen's illustrations, and I thought the story was adorable and easily lent itself to a discussion.  The kids were able to sign up for book club starting on the first of the month, and I set the limit at ten children.  They picked up their copy of the book and took it home to read.  I added a handout to each book which contained a reminder about the meeting time as well as a bit of explanation of what we would be doing. 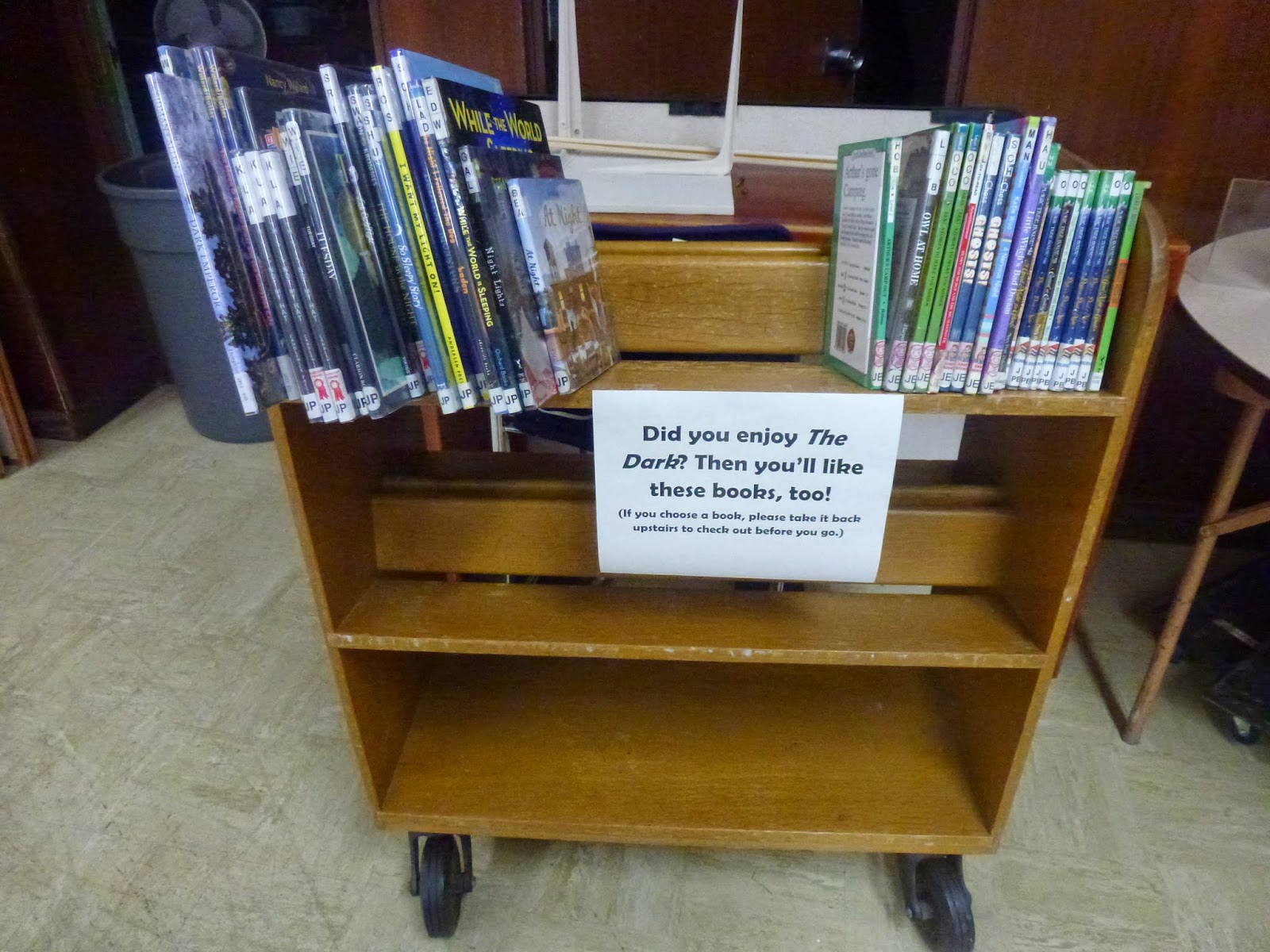 The night of our meeting, I set up our program room with a circle of chairs for the kids who would be discussing the book, some chairs behind those for parents/siblings, and activity stations.  I knew I'd have at least a few older/younger siblings who would be joining us, and I also knew that sitting and discussing a book for an hour with 5-8 year olds wasn't realistic, so I split our time: we spent the first part of the hour introducing ourselves and talking about the book, then I explained the different activity stations and let the kids pick what they wanted to do.

Our questions for The Dark were pretty basic, although we did discuss what kinds of things are good to do if someone is afraid of the dark and needs to go to sleep, etc.  You can access the rest of the questions here. At the end of our discussion, I explained the idea of a 5-star rating to the kids and let them vote.  Most of the kids gave the book five stars, although one boy said he thought it deserved ZERO stars.  I told them it was okay not to like a book, and I put his "zero star" rating on our chart along with the five-star ratings. 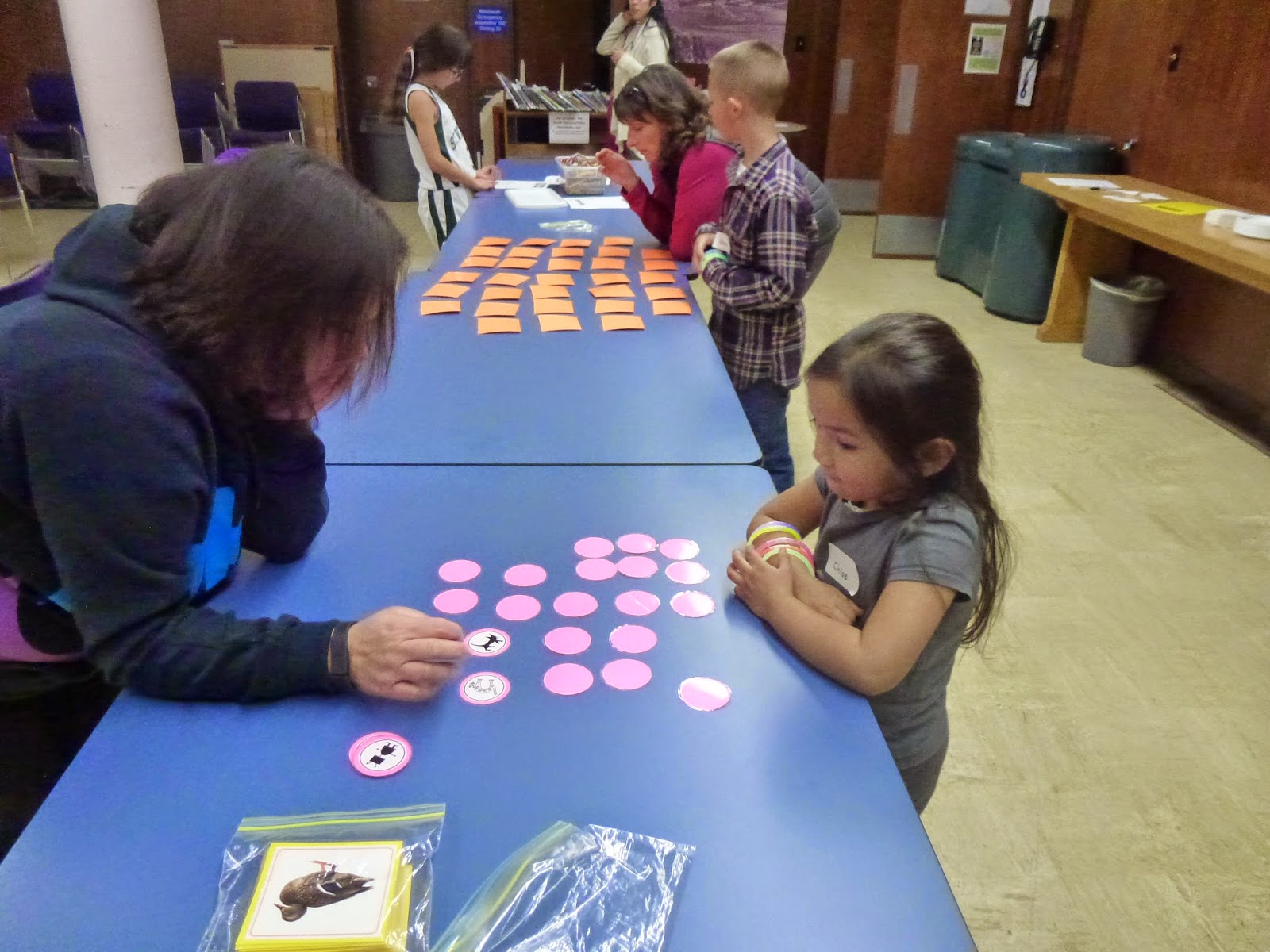 Then it was time for activities.  I had four activities to choose from so that everyone could find something to do and no one had to stand around and wait their turn.  First, kids could draw a wanted poster for the dark. I  was interested to see how they would draw the dark as a character, but most of the kids just colored in the picture space with a black crayon.  If I had been thinking about it, I would have drawn one, too, as an example.  I also made a memory-style matching game the used pictures and their silhouettes.  One boy in particular really enjoyed this activity and his mother even threatened to make him walk home if he kept winning.

I also had a station for ring toss.  I bought glow bracelets from the dollar store to use for the rings, then glued a few paper plates to a piece of tagboard and wrote numbers in the plates for the scoring. I put the tagboard near the wall, added a strip of painter's tape as the line to stand at, and that station was set. 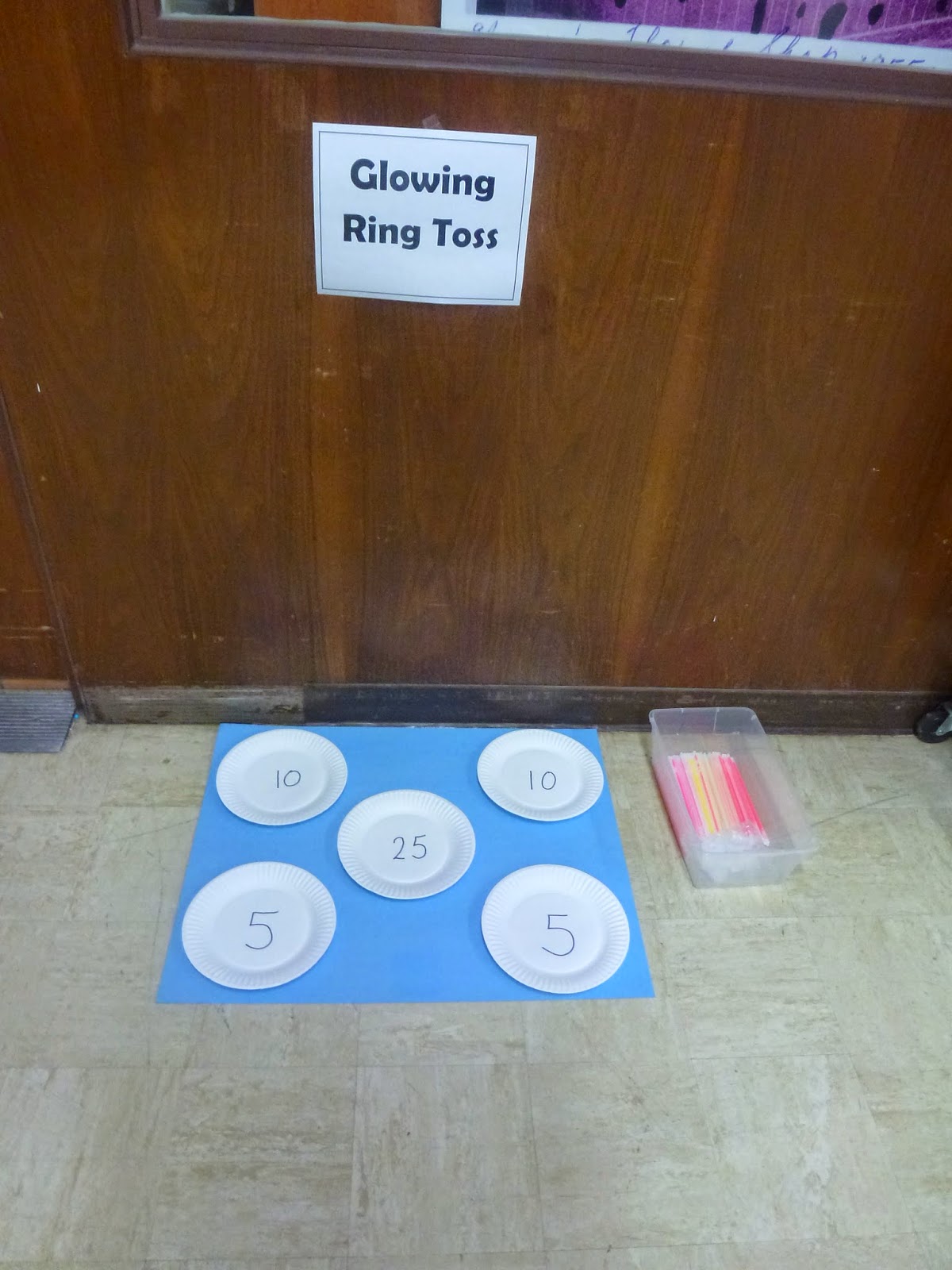 The best part, though, was the black light box. I brought in my black light flashlight (these are available online for maybe ten dollars, but I already had one) and cut a hole in the side of a large cardboard box. I made sure the rest of the box was light-tight and tipped it on its side so that the hole was on top. I taped the flashlight on top of  the hole, pointing into the box, then set white and yellow paper and a bunch of highlighters in the box.  The kids could turn on the black light and draw with highlighters on the paper.  Yellow highlighter on yellow paper is pretty much invisible, so it kind of works like invisible ink.  This was by far the most popular station.  I saw every single child go back to this one at least twice, and several also convinced their parents to join them in the box. 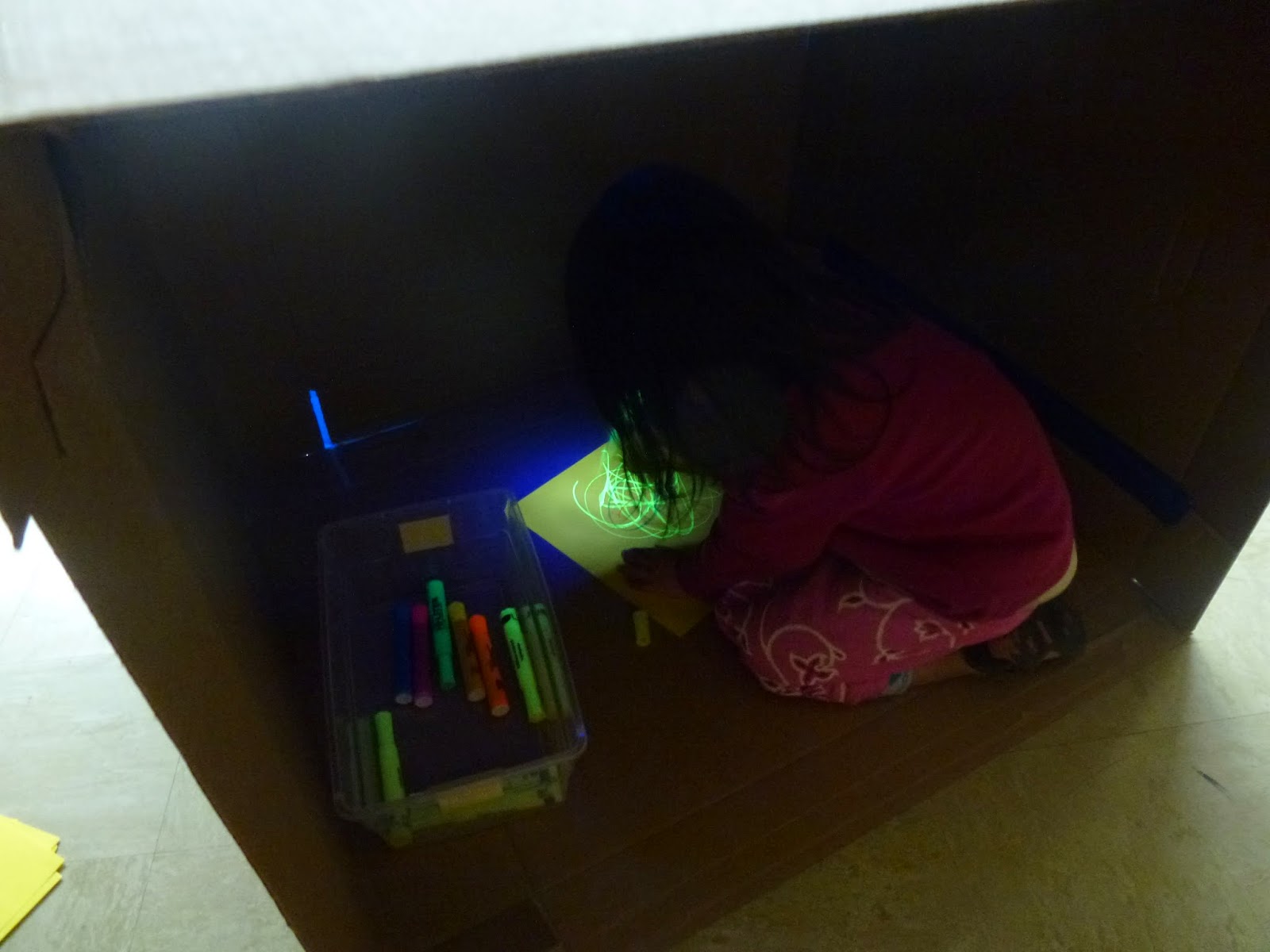 I made sure to have the sign-up sheet for next month, as well as next month's book, ready to go so the parents could sign up right away if they wanted to. I also pulled a cart of books - picture books, early readers, some nonfiction, and a few simple chapter books like Magic Treehouse - so the kids could choose more books to check out when they left. I basically grabbed any book that had dark, night, light, flashlight, blackout, etc. in the title.  About half of those were gone by the time the night was through.

The kids enjoyed the activities, and it looked like everyone tried each activity and had plenty to do. The parents and the kids both thanked me and said they would be back next month for our next meeting.  Discussing books in a smaller group like this is really good for kids' higher level thinking skills, and the variety of activities means there's something for everyone (even the kid who just wants to sit and read books after book club).  I loved watching the parents be involved with their kids in the activities, and I am already excited about our next meeting. 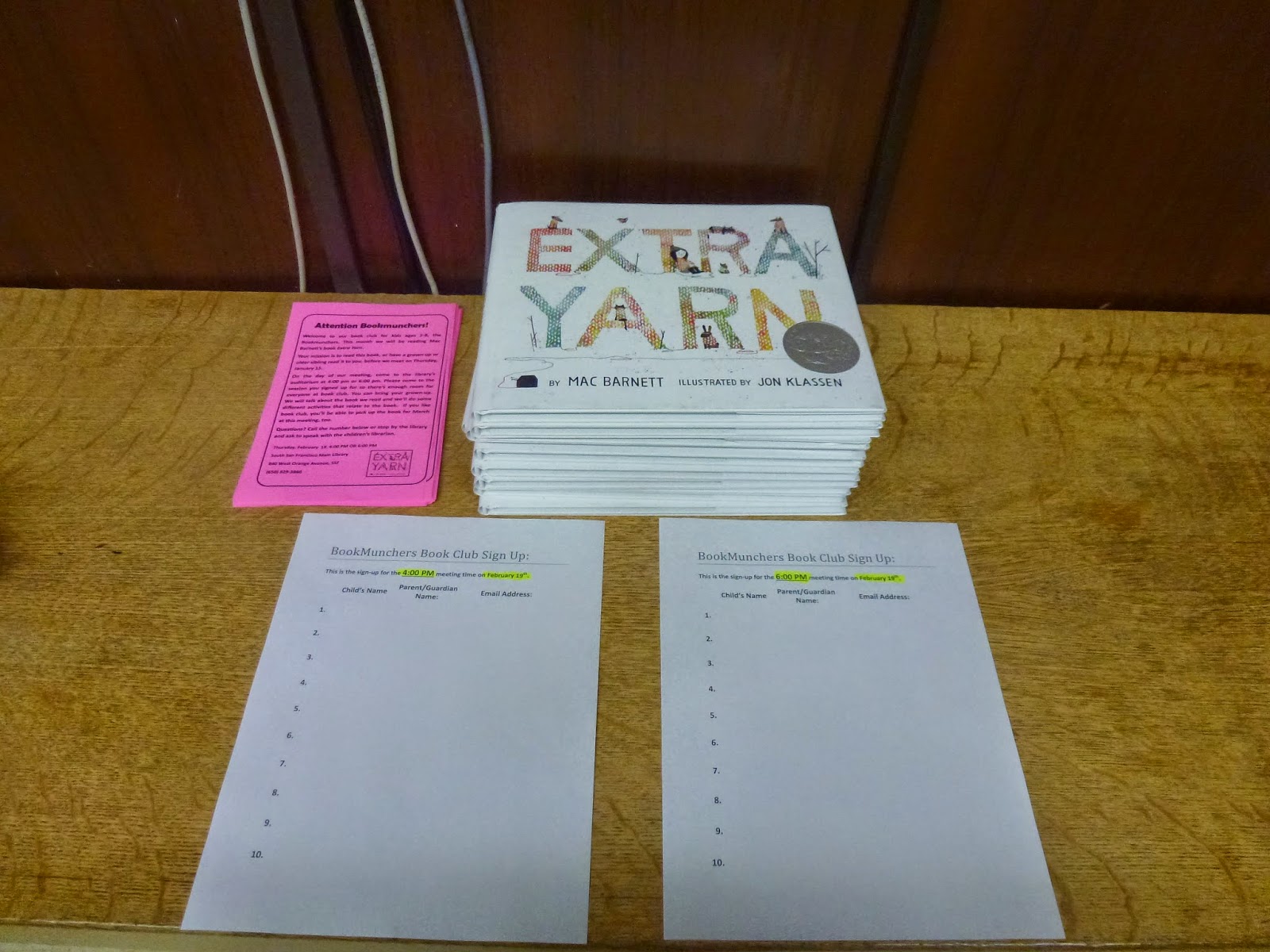