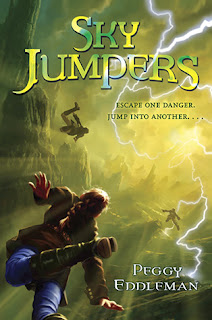 After the green bombs of World War III killed most of earth's population and rendered many places uninhabitable due to the "bomb's breath," a gas that settled in the air and kills instantly, settlements of survivors have sprung up.  Hope and her family live in White Rock, where everyone focuses on inventing new things that can help the community to recover in the wake of the war.  But when a group of bandits attack in the middle of winter and threaten to take the settlement's supply of medicine, it is up to Hope to sneak out and bring help.  Will Hope be able to save her family and community?

This book is a much more upbeat take on the typical dystopian novel.  Even though the world has changed and most of the population has died, the focus is on the community that has been rebuilt and the progress they have made in spite of their lack of resources.  Hope isn't a perfect character, but she is one worth applauding, and I enjoyed following her and her gang of friends as they tried to save their community from the bandits. I think this one would be popular in my library, and the short length combined with the action would guarantee that I could convince reluctant readers to give it a try, too.

Red flags: minor violence when the bandits invade the town