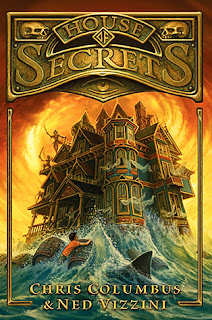 The kids in the Walker family had a great life, that is, until their father lost his job.  Now they are downsizing, and they move into a mysterious house in the Sea Cliff area of San Francisco.  But the trio soon find that the house holds more than its share of secrets. Will the kids be able to save themselves and their parents before it's too late?

I thought this book would be amazingly fast-paced and would keep me up all night. It actually didn't.  It starts out spookily enough, with the kids moving to the new house and the creepy weeping angel statue / witch appearing outside, but once they shift to the fantasy land, I lost interest quickly.  I think there was just too much going on at once.  There are a lot of fans of "scary books" in my library, though, so some of the kids might really enjoy reading this one.  It isn't super-scary, but it is intense. [Also, a family who can still afford to buy a house in the city of San Francisco is NOT suffering financially, just sayin'.]