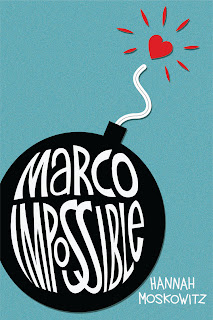 Marco has a crush on a classmate, a classmate who is about to leave for the entire summer. So he plots a way to break into the high school's prom so that he can confess his undying love before his crush leaves for the summer. He drags his best friend Stephen along for the ride.

I will have to echo what others have said about this book. I'm glad for a tween book with a gay character, and I sort-of enjoyed following the boys on their adventures across the town as they tried to rent tuxes, forge permission slips, and reach the prom on time.

But Marco is annoying. And controlling. And whiney. I spent the entire book wanting to punch his face. And there's never any explanation for why he's like that; it just seems like he was born this way and he's going to stay this way. He doesn't change. At the end of the book he is just as angsty and controlling and demanding as he was at the beginning. And I was tired of his friend being treated like a doormat.

Because this is one of the few books for tweens that features a gay character, I'd keep it, but not because I enjoyed the book.
Posted by Jenni Frencham at 9:00 PM