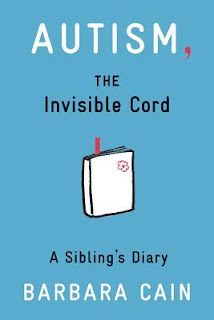 Jenny's little brother has autism, and he is being bullied by an 8th grader at Jenny's school. Jenny decides to use her writing talent to craft an article about bullying for the school paper. Throughout the year, Jenny begins to see that the cord that ties her to her brother isn't as thick as she thought. Her brother begins to develop some independence and to survive even without Jenny's constant assistance. She starts to dream of attending a special summer program for journalism, but will Ezra survive without Jenny there?

I really enjoyed this story. It's a quick read, and it addresses bullying, autism, and the life of a middle school student. It has a happy ending and is free from any red flags. There aren't enough good books featuring characters with disabilities. This one definitely belongs in the library's collection.
Posted by Jenni Frencham at 9:00 PM