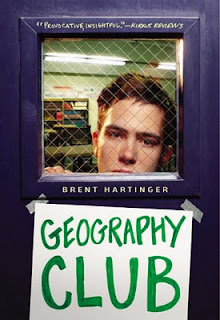 Russel is sure he's the only gay kid in his school.  Then he finds another person through an online chat room.  Then he discovers two more.  Then another.  Soon there are enough LGBT teens that they don't feel alone anymore, and they want to be able to meet regularly on school campus, but they don't want to advertise their orientations, so they start a geography club.  They figure no one will want to join a geography club.  Until someone else does.

I appreciated the discussion of bullying in this book.  I also enjoyed the way the teens were able to talk to each other and felt like they could be themselves while they were at geography club.  I definitely was glad for the way the book ended.  But I would have to say my favorite character was not Russel, but Brian.  Brian is the one kid in the school who doesn't fit into any group and is always picked on.  No one takes much notice of him until the group gets into a disagreement and Russel finds himself alone.  He sits with Brian at lunch, and Brian chooses to sacrifice part of himself for Russel, in a way that shows that Brian has more character than most of the other students in the school.  For that subplot alone, this book is worth reading.
Posted by Jenni Frencham at 9:00 PM