The sex abuse scandal at Penn State has been in the news and  flying around Facebook and the blogosphere recently. More than a few people, especially in Christian circles, have compared this scandal, and the fallout thereof, with the Chuck Phelps scandal that came to a head earlier this year.

For the most part I've chosen not to read the posts, follow the links, or involve myself in the discussions.  I've dealt with sexual abuse in a far more personal way for long enough this year, and, quite frankly, I don't like thinking about it.  There are times when this issue rears its ugly head and I find myself unable to think about or deal with anything else, but lately this hasn't been a problem.

This Sunday, though, as I flipped through my Sunday bulletin before the service began, I discovered that we would be reading 2 Samuel 13, which is the story of the rape of Tamar.  This is not a Bible story I ever look forward to hearing.  I hate how Amnon plots to rape his half-sister, how his friend encourages him to do it and even helps him come up with a plan, and how Tamar's father, King David, doesn't seem to care that his daughter has been raped.  This is not a pleasant story, and it's one that I have skipped or skimmed in the past. 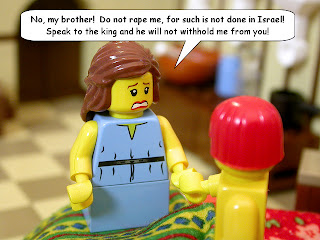 My brain was just about to take a nosedive into survival mode, which means my heart was racing, there was a rushing sound in my ears, and while I was sitting very, very still, my brain was frantically calculating the distance to the nearest exit and the likelihood of my egress going unnoticed.

Then something happened that I never would have expected: My pastor gave the congregation permission to not pay attention.  She warned us that the topic was likely to be difficult to digest and that it was okay for us to choose to tune out, to make use of the finger labyrinth [pictured below] provided in our bulletin, or even to get up and leave if we needed to.   Having this permission - a "get out of jail free" card, if you will - made me feel safe enough to keep listening.

What we discussed about the rape of Tamar and the scandal at Penn State was exactly what had bothered me so much about all of these abuse stories.  In each case there were adults who knew what was going on and chose to ignore the situation, or worse, to blame the victim.

And I learned something important: in the state of Indiana, every single person is considered a mandated reporter. This means that no one's off the hook - we are all responsible to make sure the children we encounter are safe.  We are all required by law to report any abuse or suspected abuse.

If there's anything I've noticed about Jesus by reading the red parts of the Bible, it's that Jesus always rooted for the underdog, the outcast, those who slipped through the cracks of society. If anyone can be defined as an outcast or an underdog, an abuse victim certainly can.  God and the state of Indiana both agree that we need to help those kids who cannot help themselves.

By the time they turn 18, one in four girls and one in six boys has become a victim of abuse.  Let's stand up for the Tamars and the Tinas of this world until we can truly see that it is "one in four no more."
Posted by Jenni Frencham at 9:00 PM

Thank you for sharing your story, Jenni. What makes me so furious about the situation is the seeming lack of empathy people have. Is it because they try not to think about certain things because it's too vile to imagine? Or is it because many people have a "that wouldn't happen in my neighborhood" mentality? But the truth is, like you said, sexual abuse is not limited to trailer parks and "at risk" children. This is an issue that happens in middle class and upper class homes as well! It could happen to anyone's child! And every child, regardless of race, sex, nationality, social, or economic status, deserves to be protected equally.

Also, I wanted to ask. Was anything ever done to your uncle?

No, nothing was ever done to my uncle. I didn't remember the abuse until a couple of years ago (talk about a traumatic series of flashbacks!), and by then the statute of limitations had passed in both states where he raped me. I am still trying to figure out how to report him now, not to seek justice for myself, but to protect others. However, it's complicated by the lack of inter-state cooperation, so I'm still researching exactly whom I should report to.

I've never reported my abuser either. Although I have confronted him via email as an adult. He actually did acknowledge how he'd hurt me (tricked abuse) and apologized. According to him, he was just a messed up kid (he was 16) who was also being abused. Part of me feels that was enough, since he swore he'd never done it again. But another part of me feels terrible guilt for not reporting him somehow, even though by the time I was strong enough to speak up and say something it was also way past the statute of limitations.

BTW, I didn't have flashbacks, I just always knew what happened and kept it secret (at first because I was told it was "our secret" and then because I realized it was wrong and I was embarrassed and ashamed). I don't know which is worse...growing up and living with the shame or living obliviously and then being bombarded with traumatic flashbacks. :( I think we both lose there.

I'd have to agree. I have wondered what it'd be like to grow up with that knowledge the whole time instead of being assaulted again by flashbacks as an adult, but I can't imagine that living with the memories the whole time would have been any easier. I'm not glad for what happened to me, but I am glad that I can work to help others now.

Jenni,
Thanks for posting this. What a smart and kind thing for your pastor to do! GO HER! :) Sometimes just saying "this is hard, and I don't like it" makes all the difference in the world! Also, thank you for being brave. My prayers are with you.