The Implosion of Aggie Winchester 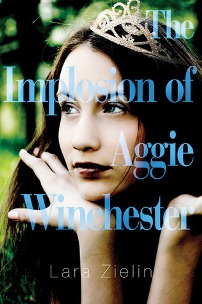 Aggie is a Goth girl.  Aggie is also the principal's daughter, and those two things don't always mix well.  Throw in a best friend who is pregnant, a mixed-up prom election, and a breast cancer diagnosis for the principal, and Aggie's got more than she can handle.  Aggie spends much of this book attempting to do the right thing, failing miserably at it, and trying to discover who she really is.

I enjoyed parts of this book.  I liked how Aggie was trying to do the right thing, even though she often made mistakes in doing that. I liked that she was (usually) very honest with her family.  I very much appreciated the ending of this book.  What I didn't like was the fact that Aggie often attempted to tell her parents the truth and was not believed.  Perhaps the author added this element to induce the frustration that Aggie likely felt in these discussions with her parents.
Posted by Jenni Frencham at 9:00 PM