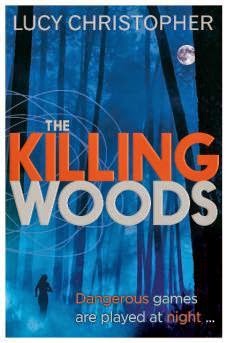 Emily's dad has been accused of murdering Ashlee, a popular teen girl whom Emily's dad carried out of the woods near her house one night. Emily's dad doesn't remember killing Ashlee, but he suffers from PTSD and assumes he killed her during a flashback while in the woods. Emily is determined to clear his name, but to do so she has to investigate what might actually have happened to Ashlee.

This book definitely sounds like it would be suspenseful and creepy, the perfect book to read around Halloween. Unfortunately, while the story does have a mystery element, the suspense aspect fell flat, as did the thrilling, must-turn-the-next-page aura that I expect from a book designated as a thriller. I also didn't feel like I got to know Emily or her father at all, even though both have starring roles in this story. I had high expectations for this book, but I was definitely disappointed. For teens who like thrillers or compelling reads, I'd recommend books by Nick Lake instead.

Read-Alike Suggestions: The Impossible Knife of Memory, The Girl Who Was Supposed to Die, Stolen: A Letter to My Captor
Posted by Jenni Frencham at 12:00 AM