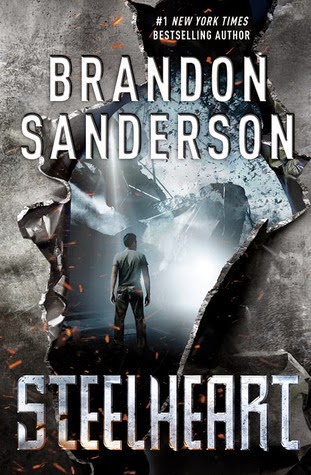 Imagine a world filled with superheroes, evil superheroes. When a bright light appeared in the sky and gave select people superpowers, David was just a child. He watched as an Epic took out customers at a bank, then was taken out by a greater Epic, one who also killed David's father. Since then David has been obsessed with the Epics and more than anything he wants to avenge his father's death. He wants to kill Steelheart. To do that, David must find the Reckoners and convince them to take out a major Epic.

I listened to the audio version of this book in my car and it was wonderful. It made my long commute that much easier to bear, and I often wanted to speed up the CD somehow so I could find out what would happen next. This book would be easy to recommend to teens who enjoy action flicks. Recommended.

Recommended for: teens
Red Flags: violence, lots of "fantasy profanity" - cuss words that are not considered profanity here but definitely are in the world of the Epics
Overall Rating: 4/5 stars

Read-Alikes: Hero, The Young Elites, The Lost Gate
Posted by Jenni Frencham at 12:00 AM