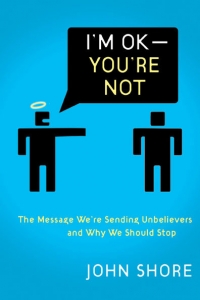 Shore, John. I'm Okay - You're Not: The Message We're Sending Nonbelievers and Why We Should Stop. Colorado Springs, CO: Nav Press, 2007.

John Shore's message is a fairly simple one: we've been focusing on the wrong thing.  For far too long, Christians have focused most of their time and energy on the Great Commission - telling others about Christ in the hopes that they will accept His gift of salvation, and not enough time on the Great Commandment - Christ's command to us that we love God and love our neighbors. Shore's logic works like this: most people, especially people in the United States, have already heard about Jesus.  The average person on the street has been exposed to the message of the gospel at some point in his/her life, and has chosen to reject it.  Think of it this way: if a follower of Islam or a Jewish person or a Mormon came up to you and told you that everything you ever thought and believed was wrong and that you needed to think like they do in order to attain heaven, what would you think?

Because most people have already heard and chosen to reject this message, Christians need to take their focus off of spreading the gospel and put it on showing Christ's love to their neighbors.  Nonchristians know what we believe, have rejected it, and are frustrated by our continual focus on changing their minds about something that, as rational, intelligent adults, they have already decided.  So rather than pushing them away with our preaching and continual plea for a decision, we should focus on loving them as fellow human beings, loving them without an agenda.

Shore is not saying that we should stop witnessing; far from it.  There are some people who haven't heard the gospel, or some who have heard and are now questioning their own faith.  Churches and Billy Graham crusades and other places of worship where people can choose to attend and learn should still be places where God's Word is preached.  But on the street, on a day to day basis, we should be focusing on loving our neighbors, because that's what Jesus said we should do.  Our love for our neighbors will open the door to the message Jesus has for them, much more than our words have done.
Posted by Jenni Frencham at 9:00 PM