Anne Frank and Me 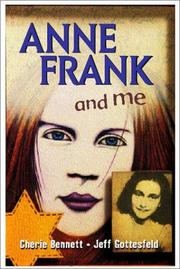 If you have read The Devil's Arithmetic, then you have the general idea of the plot of this novel. The main character, Nicole, is learning about the Holocaust and is less than enthusiastic about this study. An unusual accident at a museum causes Nicole to believe she has been transported back to France during the second world war and is now part of a fairly rich Jewish family.  Nicole's family faces the difficulties of being Jewish in German-occupied France, and eventually Nicole is taken to a concentration camp.  She chooses to go to the gas chamber with her sister rather than abandon her to die alone, and as she "dies" in the past, Nicole wakes up in the present with an increased appreciation for what others have endured.

I appreciated this novel and I did enjoy the story, but this novel is not unique.  Perhaps, though, it was time for a reinterpretation of an old story.
Posted by Jenni Frencham at 12:00 AM