The Children are Free 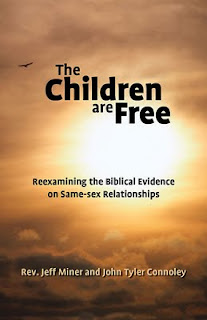 This book is divided into several sections.  The first part of the book examines the seven "clobber" passages that are typically quoted as proof that the Bible condemns homosexuality. The next part of the book examines passages that could be interpreted as including homosexuals, and the third section attempts to answer a question I've had for a long time: of the 613 rules listed in the Old Testament, how do we know which rules we are supposed to follow and which we can ignore?

This book is an invaluable resource for Christians who are members of the GLBT community as well as those who want to understand how a person can reconcile Christianity and homosexuality.  I checked this book out of a library, but I will be purchasing a copy to place on my shelves.
Posted by Jenni Frencham at 9:00 PM