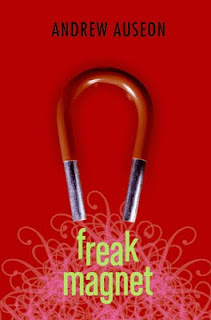 Charlie charts the movements of the stars in a small black journal while he takes care of his mother who is slowly dying of Huntington's disease.  To the rest of the world, Charlie is a freak; he speaks his mind and doesn't understand social conventions.  Charlie is a freak, and Gloria is a freak magnet. Gloria keeps a notebook of all the freaks who follow her; her notebook is her one grip on sanity in an increasingly crazy world.  Her brother has been dead for a year and no one else seems to be mourning his death.  Freak and freak magnet collide in this fascinating and entertaining novel.

This book is told from both Charlie's and Gloria's perspectives, so it was neat for me to see the story from two different angles. I did enjoy this story, and it had a satisfying ending; however, it isn't going to end up on my top ten list this year.
Posted by Jenni Frencham at 12:00 AM