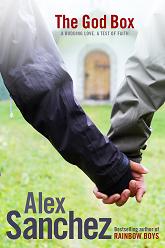 Paul attends a very conservative public school in an equally conservative small town.  His friends are all Christians, many of them attending the same church as Paul and participating in after school Bible studies.  Then Manuel moves to town. Manuel is the first openly gay teen in Paul's school, and Manual also is a Christian.  Paul and his friends have to wrestle with what they have been taught is truth and what Manuel is saying is truth.  Manuel's very presence rips the Christian group in two, with those who accept Manuel on one side and those who condemn him on the other.  Paul feels the effects of this debate very personally, as he is wrestling with his own demons of homosexuality.  His friendship with Manuel causes him to evaluate what he thinks and believes as well.  When Manuel is savagely beaten for his orientation, Paul must take a side once and for all and stand for what he believes in.

This book interested me for obvious reasons.  I can completely relate to Paul's struggle with his orientation as well as his concern for what the Bible says about homosexuality.  I have listened to and argued on both sides of the homosexuality debate and know how personal and heated these discussions can get.  Parts of this book, I will admit, read a lot like many of the websites about what the Bible says about homosexuality.  It almost seemed as if the author was attempting to turn one of those websites into novel form, perhaps in the hopes that more people would read the novel.  In any case, I was glad for Paul's decisions toward the end of the novel, and I appreciated that the author made this struggle seem real and the characters real as well.  This story does not make for easy reading, but it is definitely worth it.
Posted by Jenni Frencham at 9:00 PM