The Prince and the Dressmaker 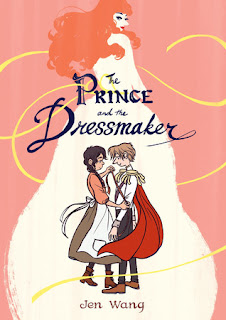 Wang, Jen. The Prince and the Dressmaker. First Second, 2018

Prince Sebastian is supposed to be choosing his future queen and settling in to his duties as the future king, but he is exhausted because he spends each night as Lady Crystallia, a fashion icon. Outside of one servant and his dressmaker, no one else knows that Sebastian occasionally wears dresses and enjoys doing so. Meanwhile, his dressmaker, Frances, dreams of having her designs noticed by the most famous designers so she can make a name for herself and be more than just the prince's secret dressmaker.

This book is simply fantastic. Starting with the cover image (please note that the "spotlight" on the main characters is a dress that Lady Crystallia is wearing), the illustrations carry this story along perfectly. We get to witness the dreary life Frances led before she was discovered by the prince, and her hidden talent later on. The prince is eventually discovered by another member of the court and dragged in front of his parents in one of his Lady Crystallia gowns. However, the parents don't react in the way many of us would expect. This book is fantastic and I highly recommend it. My spouse even suggested we purchase our own copy to keep - a thing we've done with maybe a dozen books outside of the Harry Potter series.

Recommended for: tweens
Red Flags: none
Overall Rating: 5/5 stars
Posted by Jenni Frencham at 12:00 AM