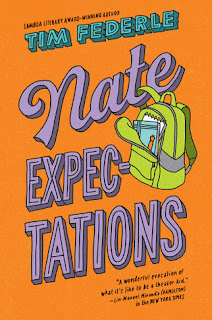 Tim Federle has created a third installment to the Better Nate Than Ever series. Nate has returned home now that his time on Broadway is over, and he is attending high school for the first time in his life. Nate decides to create a musical of Dickens's Great Expectations for his English project, and he enlists the help of his new friends in doing so. Meanwhile, his Broadway boyfriend is starring in a television show, and they are attempting a long-distance relationship. Oh, and Nate hasn't come out to his parents yet.

I thought the first book in this series was adorable. This book is also adorable, but it's losing some of that simply because the main character is now in high school. Normally, a book with a main character in high school is considered young adult, but this book still definitely reads like a tween book. Nate has a chatty, stream-of-consciousness narrative voice which can be trying at times if a reader simply wants to know what happened next. The Nate books haven't been popular at my library, but I think that is due to the library's location rather than the writing quality of the books themselves. I recommend this book where the first two in the series are popular, or where a librarian sees the need to add more queer literature to the tween section.