The Invisible Life of Ivan Isaenko 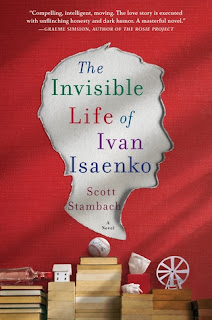 Ivan lives in an orphanage in the Ukraine. As a result of the Chernobyl accident, he and the other children at the orphanage are dealing with various disabilities. Ivan himself has only one arm/hand, no legs, and although his mind is unaffected, it is difficult for him to speak. He amuses himself by playing tricks on the other children and on the nurses, until one day a new person arrives who steals his heart away.

Initially when I read this book, I enjoyed it as much as anyone can enjoy an adventure in the mind of a teenage boy. The story was interesting because of the different setting, but it was still "teen boy loves girl and is sad and telling his story so obviously he didn't get the girl for whatever reason." It still had lots of scatological humor and references to masturbation. I wasn't super impressed. But then I read Emily's review and my opinion changed a bit. I had not thought about what this book would look like through the eyes of a parent of a child with a disability. And it's true that Ivan is particularly horrible to the other children, I didn't see this as mocking children with disabilities, but rather showing Ivan to be a particularly normal and not entirely sympathetic character. However, the reactions from the author and a few of his supporters left a bad taste in my mouth. For these reasons, this book receives 2 stars from me.