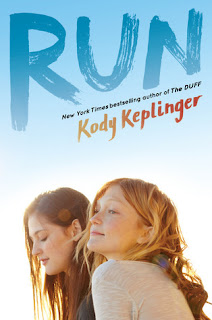 Agnes is a good girl. She always follows her parents' rules and never asks for exceptions. She knows the rules are there to protect her because she's legally blind. Bo, on the other hand, is the type of girl Agnes has been told to avoid. She comes from a family with a bad reputation and her mom is high on meth more often than she is sober. But when Bo and Agnes become friends, both of them realize that there may be more to life than what they have been given so far. It will take both of them stepping out of their comfort zones to realize the importance of their friendship.

This is the book which recently caused quite the brouhaha in the YA and LGBT community. VOYA listed this book as appropriate for older teens, citing mature themes including bisexuality. That entire issue has been discussed elsewhere, so that's all I'm going to say about it. That being said, this is a hard book to read. The characters are dealing with a lot, especially Bo, who just wants to graduate and get out of her house and avoid being sent into foster care again. There is mention of drugs, there is drinking, there is strong language - all of these things cause me to recommend this book to older teens. I wanted this book to be more than it was, to dive deeper. I wanted Agnes to rage against her parents instead of accepting her punishment. I wanted Bo to escape again in order to avoid foster care, as that seemed more fitting with her character. I'd add it to my collection if I had unlimited space, but otherwise I'll just suggest teens put it on hold.

Recommended for: teens
Red Flags: alcohol and drug use by adults and teens, slut-shaming of Bo (even though she's a virgin), Agnes has sex with Bo's cousin, strong language
Overall Rating: 3/5 stars

Read-Alikes: Georgia Peaches and Other Forbidden Fruit, Not Otherwise Specified, Just Call My Name
Posted by Jenni Frencham at 12:00 AM