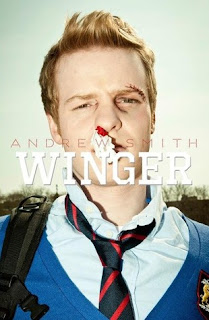 Ryan Dean West is a 14-year old junior at a boarding school on the West Coast. He's gotten in trouble and been placed in Opportunity Hall, the dormitory for kids who need the "opportunity" to be more supervised for a semester or two. Ryan Dean is trying to survive being a junior when he's the same age as many of the freshman, getting his best friend Annie to realize he wants to be more than just friends, and hoping his roommate, who's built like a linebacker, won't kill him in his sleep. Interspersed with Ryan Dean's story are illustrations and short comic strips.

At first I didn't think I'd like this book. I don't generally enjoy stories about rich, entitled kids at boarding schools,and I was annoyed that Ryan Dean was called two first names (technically, they are both his first name). Then there's the narration by 14-year old boy, which means practically every sentence has something to do with sex or hot girls or what's going on in Ryan Dean's pants. But I was pleasantly surprised to find that Ryan Dean developed some character throughout the book, and that even though he's at a boarding school, he doesn't always act like an entitled rich kid (beyond the "Hey, Mom, I ruined my Nikes so can you just buy me some new ones and send them ASAP?"). The illustrations were funny. Ryan Dean's mom's first package to him was hilarious. And the ending of the book was really surprising. So I guess my only other complaint is that the kid on the cover of book is wearing a uniform that doesn't match the description inside the book. Would it have been that hard to change the cover or the description so they matched? But maybe that's just me.