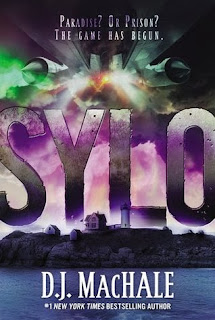 Tucker lives with his family on an island off the coast of Maine.  He prefers to remain fairly anonymous, just trying to survive high school.  Then people on his island start dying, he sees a mysterious explosion off the coast of the island, and the Marines declare a quarantine on the island and start rounding up people and placing them in internment camps.  Does Tucker have what it takes to become a hero and save his island?

I enjoyed MacHale's Pendragon series, so I was glad to see another book by this author.  This book does not disappoint.  There's plenty of mystery and intrigue involved - why is the island quarantined?  How did those people die so suddenly when they were perfectly healthy? What is that weird, red crystal the surfer guy keeps trying to push on people? Combine that with plenty of action, and I can see this being a popular read for teens and tweens.  This novel is fast-paced and could easily lend itself to a sequel.  I look forward to more good things from MacHale.

Red Flags: the Ruby that some people end up taking is pretty obviously a drug; lots of violence (people getting murdered, etc.); language