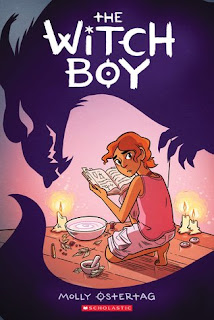 Aster is being raised to be a shape-shifter, along with all of the other boys in his family, but he is drawn time and again to the lessons in witchcraft the girls are learning. He is teased by the other boys for wanting to do girly things, and his elders caution him not to be like his grandfather, who was into witchery and was cursed. But when boys start mysteriously disappearing, it's up to Aster and his skills in witchcraft to get to the bottom of it.

I LOVED this story. From a graphic novel perspective, the panels are colorful and engaging, and the color palette perfectly matches the tone of each section of the story. It's just the right amount of scary for a tween audience. The story itself is very interesting, both in concept and in pacing. There is plenty of character development and just enough world building so the reader can follow the plot. This story, though, is mostly about Aster, a boy who wants to do girl things. In the end, his desire to do girl things is accepted rather than shunned, and he finds out some surprising things about his relatives along the way. His only friend outside the family has two dads, and that is mentioned in passing throughout the story because it is shown as perfectly normal (which it is). This is a great book to give to kids who enjoy the many Rick Riordan series, Harry Potter, or any other fantasy story involving magic. Highly recommended.

Recommended for: tweens
Red Flags: some mild fantasy violence; witchcraft (like, lighting candles and mixing potions and all that - if your family won't read Harry Potter, you won't want to read this, either)
Overall Rating: 5/5 stars

Read-Alikes: The Iron Trial, Harry Potter and the Sorcerer's Stone,
Posted by Jenni Frencham at 12:00 AM