The Meaning of Birds 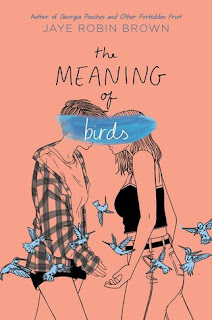 Jess and Vivi were inseparable for more than two years. Jess felt like Vivi completed her, understood her, helped calm the rage of anger that so frequently spilled over before. But now Vivi is dead, and Jess isn't sure what to do anymore. Her rages and fights at school land her in an alternative school for a month; her mother is hoping she will use this time to work through her grief and find her own way.

This is a lovely book about grieving the loss of a loved one. It is not a happy book, but it is a good one and a necessary one, particularly because of the amazingly queer cast of characters. Jess is a lesbian; Vivi never self-identifies but reads as pansexual; Jess's best friend is asexual; a classmate at the alternative school is a straight guy who is dating a transgender girl and he takes a lot of flack for it but loves her anyway. Jess's grief reads as genuine. She spirals in and out of rages; she loses interest in her activities from before Vivi's death; she loses touch with her friends. Numerous people figure she should be "over it" by now, as if grief somehow has a deadline.

I also appreciated the discussion of alternative education opportunities - internships, etc. - for those who may not be interested in attending college. Jess becomes interested in blacksmithing, which is fascinating and different and not something you'd see at most traditional colleges or universities. With the student loan debt situation and job situation we have in this country, it's good to remind people that there are other ways to make a living and be an adult, and not all of them require fancy degrees.

Recommended for: teens
Red Flags: some language; some violence particularly on Jess's part; one character grabs Jess's crotch in order to determine what kind of genitalia she has; lots of underage drinking and recreational drug use
Overall Rating: 4/5 stars

Read-Alikes: We Are Okay, Summer Bird Blue, You'll Miss Me When I'm Gone