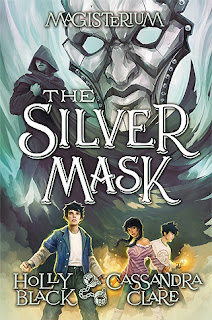 Callum Hunt, who carries within him the soul of the most evil mage ever, is in prison while the Magisterium tries to figure out what to do with him. Master Joseph wants to turn Callum loose in the hopes that he will complete the work Constantine started. Most of the Magisterium wants to keep Callum in prison for life or possibly execute him. Callum himself isn't sure what he wants; he's certain he's not the resurrected Constantine, but that's about the only thing he's sure of.

This book picks up where the third book left off, and leaves off at a cliffhanger which sets the stage for the fifth and final book in this series. The similarities between this series and the Harry Potter series make it an excellent read-alike for tweens who enjoyed Harry Potter. This may also be a good series to start a reader on if they think Rowling's books look a bit too long or overwhelming. This is a fast-paced story that keeps the reader turning pages, and while it is certainly helpful to have read the first three books in the series, I found that I could pick this one up and get back into the story even though it has been probably a year or more since I read the third book.

It is worth mentioning that this book goes further than Rowling did by having the Dumbledore-esque character actually be gay (or at least he's a man who is interested in men; it's possible that he is bi- or pan- or something else). It was only a brief mention in passing as the character spoke with Callum, but he did say that he was in love with a man at one point.

Bottom Line: The series is good, and it's very readable. It's not my favorite series of all time, but I could easily book talk these books to tweens and entice them to give them a try.

Read-Alikes: Harry Potter and the Deathly Hallows
Posted by Jenni Frencham at 12:00 AM