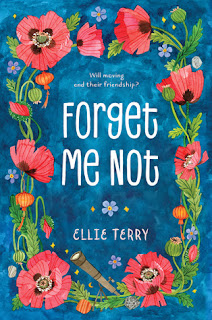 Calli is in 7th grade and has started at a new school eleven times. Her mom has a habit of hooking up with a guy, dating for a brief period, then having a messy breakup where she packs everything into the car and hauls Calli to a new town to start over again. Calli also has Tourette Syndrome, and she has been warned not to explain this to her new teachers or classmates. Jinsong is Calli's neighbor and he likes her - possibly as more than a friend - but he's also student body president and very popular, so he isn't sure how/if he can stand up for her when the inevitable teasing starts.

Calli's chapters are told in verse, which makes this book a pretty fast read, and that fits with Calli's personality because she is interested in space but is also artistic. Jinsong's internal struggle between standing up for Calli at school and hiding his interest in her reads true and is perfect for this age group, too. The fact that Calli's mom hasn't taken the time to understand her condition and insists that she could just "not do it" when her tics occur rings true as well. The author states in a note at the end that she also has Tourette Syndrome, so this is an #ownvoices novel. I could see this book appealing to kids who enjoyed Wonder and also to those who like reading novels in verse. This is a much-needed addition to most library collections.

Recommended for: tweens
Red Flags: Calli is bullied quite a bit, mostly by the stereotypical Mean Girl in the story; it turns out this person also bullied Jinsong because of his ethnicity and that moment is described as well.
Overall Rating: 4/5 stars

Read-Alikes: Wonder, Insignificant Events in the Life of a Cactus, Absolutely Almost
Posted by Jenni Frencham at 12:00 AM