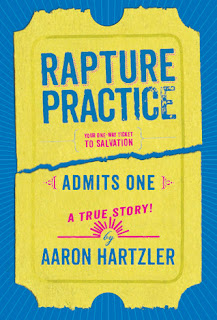 Aaron details his life in a fundamentalist Christian family, including attending a private Christian school, participating in neighborhood Good News club, and eventually questioning everything he's been taught.

I really enjoyed the first 3/4 of this book. I started reading it on my break at work and picked it up again as soon as I got home. The stories Aaron tells are so similar to what I experienced that I was interested to see how he escaped and how his family reacted.

But when Aaron gets in trouble at the end of his senior year for going to a party at a friend's house and drinking, he decides to be gracious to his family and allow them to believe what they want, even if he disagrees. I'm okay with that, but I had too many questions at the end of this book:

1. Did Aaron ever explain to his family that he doesn't believe what they do, and how did they react when he did?
2. Did he come out to them? At the end of the book he's sort-of figured out that he's gay, but nothing comes of it.
3. Did he go to Bible college as his parents wanted him to?
4. How is his relationship with his family now?
5. What does he believe now? Does he still identify as Christian, or is he identifying with another faith, or does he consider himself to be not religious?

This book was a great first half of the story. The portrayal of the fundamentalist family and school was quite accurate, although I was surprised they weren't at church more than he mentioned (I didn't read any instances of revival services or missions conferences). I could only give the book four stars, though, since I didn't have my questions answered - those questions were what I was hoping to read in the last portion of the book. This book would be good for people who want a picture of the Christian fundamentalist movement, but not so much for those who have been in it and want to see how someone else escaped, or for those who want more information on the gays vs. Christians debate, since that's barely mentioned in this book.
Posted by Jenni Frencham at 9:00 PM