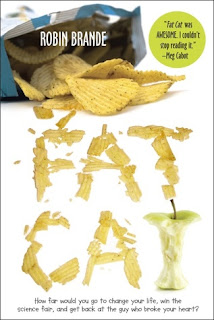 Cat is in a very competitive science class this year, and she has to create a research project based on a random photo she chooses from the teacher's folder. Rather than grabbing a picture of plants or insects, the things Cat has been interested in, she ends up with a picture of early humans. She decides to begin her research by mirroring, as closely as possible, how early humans lived and ate: she gives up her cell phone, her television, and her car, as well as chips, soda, and candy bars. As her project progresses and her body responds to all the changes, other people begin to notice the difference in Cat. And suddenly she has to decide how to respond to all the attention she is receiving, especially from Matt, whom she was friends with until 7th grade and has hated since then.

This book was a quick, entertaining read. I finished it in just a few hours. I enjoyed the science-based plot, like I did in Brande's Evolution, Me, and Other Freaks of Nature. What I didn't enjoy was the fact that we know from the first chapter that there is something going on between Cat and Matt, but (like Matt) we are clueless about the details until the end of the book. Overall, though, this was a good book. I would recommend it to those who enjoyed Brande's other book, as well as readers who enjoyed Going Vintage.
Posted by Jenni Frencham at 9:00 PM