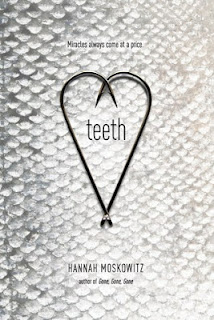 Rudy's little brother has cystic fibrosis, so his family moves to this remote island so the brother can eat the fish that live there; apparently, these fish has some mystical healing powers.  Rudy's trapped on this tiny island with nothing to do, when he meets Fish Boy.

Fish Boy, or rather Teeth, as he calls himself, is sort of like a merman. And he's trying to protect the fish that people are scarfing, because he calls those fish his brothers. Rudy has to decide who he'll save - the fish or his little brother.

This book was a bit weird.  Okay, so the whole "fish boy exists because a woman was raped by one of these miracle fish" thing - that was REALLY weird.  The rest of it was just sort of weird.  The story had an okay ending, though.  And it was a quick read.  Not a bad beach book, I guess, but I won't be putting it in my personal library any time soon.
Posted by Jenni Frencham at 9:00 PM