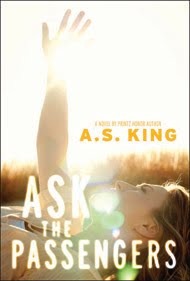 Astrid's family moved from New York City to a tiny speck of a town.  Her younger sister has adjusted to small town life.  Her father misses his "real" job and smokes pot in his free time so he can forget where he is.  Her mother pretends she's still in New York and tries desperately to balance her family's image with settling in to this small town.  And then there's Astrid.  She's taking a philosophy class in high school and learning to question everything; she's in love with her coworker at a catering company, and no one else knows that she's gay.  She's not even sure herself.

Everything explodes when Astrid and several of her friends are caught at a gay bar, where the police are making all the minors call their parents to pick them up.  Astrid's sister is devastated and can't stand the rumors that intimate that she is as gay as her sister.  Astrid's dad is still in his pot cloud.  Astrid's mom spends the first several days in bed and the next several ironing the curtains.  Astrid's few friends have betrayed her. Where does she go from here?

I found this story line to be very similar to The Earth, My Butt, and Other Big, Round Things. There's a crazy mother, a laid-back father, a spoiled-brat sibling, and the main character who needs to grow a backbone.  Also similarly, Astrid does eventually stand up for herself and things get better.  It's not a "happily ever after" ending, but it's also not a "I am now depressed because I read this book" ending.

I liked the story.  I liked the tie-in of Astrid "sending love" to airplanes overhead.  I think her mother was a bit over-the-top (who takes their 16 year old daughter on "mommy and me" dates that involve drinking?).  I was glad that Astrid was willing to dwell in the questions; I was glad she was able to come to terms with who she is, and I was grateful for this book painting a fairly accurate picture of coming out in a small town.  This book was a quick read, but well worth it.
Posted by Jenni Frencham at 9:00 PM