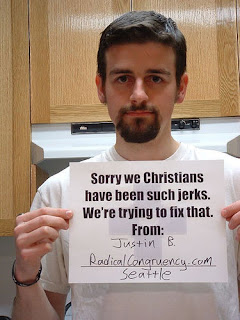 I borrowed this picture for an earlier post when I reviewed the book unChristian.  I have found it fascinating that the fundamentalist churches in general place much emphasis on confronting others with their sins, on apologizing for sins against other Christians, and on making things right with Christians, but that we don't, as a whole, apologize to the world at large when we screw up.  And let's face it: when the church screws up, it screws up loudly and enthusiastically.

A friend recently issued an apology on her blog based on the choice of Bob Jones University to keep Chuck Phelps on their board of directors.  I have to say that I wholeheartedly agree with what she has said.  Although my views on many things have changed drastically from the time I was at Bob Jones University, I am more than willing to allow that God has enough grace to cover their beliefs and mine, even if we approach the same book and come away with very different answers.  There are many areas where I am more than willing to "agree to disagree" and continue to be grateful for the lessons I learned and the friendships I formed at my alma mater.

However, this blatant expression of ungrace, of anti-testimony, is exactly what drove me away from fundamentalism in the first place.  Jesus placed a high priority on loving our neighbors and showing His love to the world.  When we shelter ourselves from the outside world, when we "close ranks" and attempt to hide the sin in our camp, this is exactly when we become an anti-testimony.  Instead of drawing people to Christ's love, the church is giving the rest of the world yet another reason not to ever darken its doors. I've met too many people who have been pushed out of church by the hate they saw there.

I echo what Rachel said on her blog: I am sorry.  I aligned myself with a group whose reputation for ungrace has reached monumental proportions.  By my silence I consented to their actions.  For many years I also taught numerous children of various ages and in various schools, Bible clubs, Sunday schools, etc.  In each of those cases, I mindlessly parroted the party line, thus ensuring that the next generation will also be well skilled in demonstrating ungrace and will believe that they are doing right, as an authority in their life told them this was correct.  James rightly warned against the dangers of being an educator; not only am I responsible for my actions, but I have spurred further actions in the hundreds of children who passed through my classroom doors.


I was a jerk.  I supported jerks in my silence.  I taught others to be jerks as well. 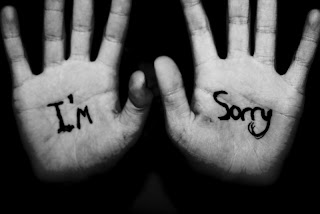 Spot on, especially regarding teaching the little children. I wish I had done differently then. I'm grateful God will redeem my failures in that arena.

Thank you for this. Thank you. I'm dealing with this (what have I done to influence the younger generations in the name of Christ before I realized how messed-up our system is?) too, and it's tough. Thank you.