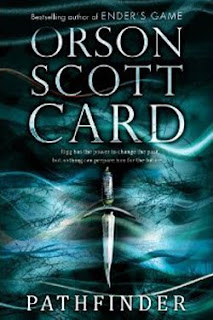 Rigg has a special talent: he can see the paths that people and animals have made as they walk.  He knows where people have gone, how long ago they were near, and how to find animals in the forest. Rigg's father has been trianing him to use his talents.  When a tragic accident in the forest takes his father's life, Rigg sets out on his final mission: to find his sister and his mother.

Meanwhile a man named Ram is on the first ship to jump into hyperspace.  An inexplicable accident causes his ship to become nineteen separate ships, all traveling in different folds of time but all heading toward the same planet.  Ram, the only human not in stasis on this ship, must decide what needs to be done in order to save those on the ship and to complete their mission.

I love books by Orson Scott Card, and I especially love YA fantasy, so this book was a perfect combination for me.  The story was interesting, if predictable, and Card employed a strategy similar to what he used in Ender's Game: each chapter starts with a snippet from one plot, then the rest of the chapter is told from a different perspective.  These two bits helped me to piece together what was going on and to enjoy the fantasy aspect even more because of what happened in the sci-fi sections.  Stop by your local library and check this book out if you have a chance.
Posted by Jenni Frencham at 9:00 PM