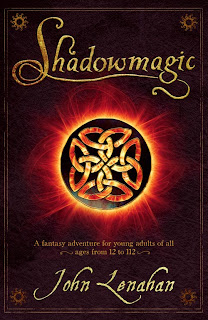 This book is billed as "A Lord of the Rings for the 21st century. Only a lot shorter. And funnier. And completely different."

Conor thinks his dad is a bit odd for forcing him to learn swordfighting and teaching him Ancient Gaelic, that is, until two people on horseback break through the front of his house and take him to Tir-Na-Nog, an ancient Celtic "neverland" of sorts. Conor and his father are soon involved in an epic battle involving an ancient prophecy and family secrets long hidden.

This was a fun story.  It was exactly like its description - like Lord of the Rings, only shorter, funnier, and completely different. I enjoy fantasy, and any story that involves imps and banshees and trees with personalities is right up my alley.  I will probably finish reading the sequel, Prince of Hazel and Oak, sometime tonight, and I eagerly await the next installment in the series.
Posted by Jenni Frencham at 9:00 PM

Thank you so much for your kind words about Shadowmagic. Comments like yours makes it easier to write book 3.