The Incredible Magic of Being 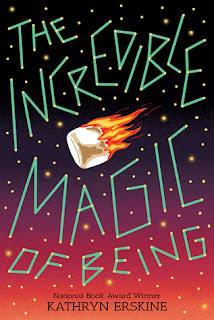 Erskine, Kathryn. The Incredible Magic of Being. Scholastic Press, 2017.

Julian and his family have moved to a remote lake town in order to recover from some stressors in their lives. Julian's mom used to be a doctor, but one of her infant patients died on her watch, so she's taking a break from that to homeschool Julian (who has health issues which remain unidentified until nearly the end of the book) and to work on their new Bed and Breakfast. But their grumpy next door neighbor's lawyer spoils everything when he says that their addition blocks the neighbor's view of the lake and must be taken down. Julian takes it upon himself to befriend the neighbor and convince him to let them keep the addition.

This is an unusual story for a few reasons. First, Julian is described as different or fragile - his mom certainly treats him that way - but it isn't until very near the end of the book that we find out what makes him that way, and even then it is glossed over. Second, this book walks the tightrope between realism and magical realism, mostly tied up with Julian's "uni-sense," with which he thinks he can sense the universe. Other than that, there are parents who argue, an older sister with a teenage-sized attitude, and a grumpy neighbor that Julian is sure will be his friend.

Recommended for: middle grade (Julian is 9-10 in this story, so most kids older than that will not be interested)
Red Flags: none
Overall Rating: 3/5 stars
Posted by Jenni Frencham at 12:00 AM