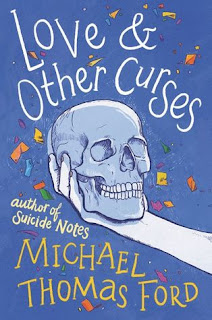 Sam's family is under a curse. Every person in his family who falls in love before the age of 17 sees their loved one die. This has happened as far back as anyone in the family can remember. So of course Sam is trying to do everything to stay away from romance for at least a few more weeks. This shouldn't be a problem for the openly gay teen in a small coastal tourist town, until Tom comes into town. And with Tom comes a boatload of trouble for Sam.

There's a lot to unpack in this story. There is the idea of a generational curse, similar to that in Louis Sachar's Holes, along with Sam's family's belief in the supernatural. Additionally, Sam has been sneaking out to spend time at a gay bar (which he isn't legally old enough to do), and while there he spends most of his time backstage assisting the drag queens. On top of all of that, Sam finds out that Tom is transgender and Tom's family is not supportive, deadnaming him and using female pronouns in reference to him. Furthermore, Tom is straight, so even though Sam is attracted to him, it isn't reciprocated.

The overall story arc is interesting enough. Sam's supportive family is a wonderful relief to read about in contrast to Tom's family. The issues Tom has with his family - wearing makeup and feminine clothing around them and hearing them say that obviously he would like those things now that he's tried them, them making references to his need to grow his hair out and allowing him to spend time with Sam under the guise that they are dating - ring true as I am married to a transgender man and witnessed these very types of things when we were dating.

Sam's inability to use consistent pronouns with the drag queens is irritating beyond belief, especially once he is informed that female pronouns are always okay, but male pronouns are only okay when a queen is out of drag. That, combined, with Sam's consistent use of male pronouns for Tom make things weird when he's around the queens and changes pronouns mid-thought or mid-sentence. This is one of those sad books about transgender teens who don't get support at home, and Tom does not get his happily ever after ending, and indeed falls prey to the "transgender person must harm themselves or be attacked or something" plot line that is so overused. Apart from these flaws, the story is a good one.

Recommended for: teens
Red Flags: misgendering and deadnaming of Tom and the drag queens, drug use and alcohol use, Tom and Sam fight and through homophobic and transphobic slurs at each other.
Overall Rating: 4/5 stars

Read-Alikes: Holes, Drag Teen, What If It's Us