The Way the Light Bends 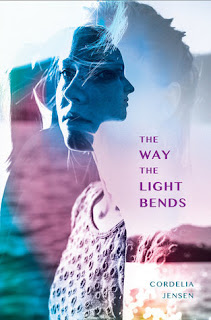 Linc is the artistic sister. She loves photography, and her mind is always seeing things in motion and the way objects can capture a moment. Holly, Linc's sister who was adopted when Linc was just a baby, is the smart one. She is doing fantastically at school, is athletic, and constantly pleases their parents. Meanwhile, Linc's mom only ever seems to nag Linc and point out how she could be more like Holly if she just Tried Harder. Linc and Holly drift apart as Linc secretly applies to an elite art school and sneaks out of the house to go to classes, meanwhile trying to figure out how to convince her parents to let her pursue her dreams.

This is a novel in verse, and as such may appeal to teens who wouldn't otherwise tackle a book of this length. It reads quickly, and the poetic elements are appropriate as Linc is the narrator through the entire story. I have taught students like Linc, students who don't excel academically not because of lack of effort, but rather because their gifts lie somewhere beyond acadamia. I wasn't that surprised at the "big reveal" at the end of the story, but as I am not the target audience, I am guessing some teen readers may be surprised. I did appreciate how the reveal was treated, as well as the presence of Linc's best friend who is dating a girl. Her presence in the story is not a coming out plot or a place to discuss homophobia; rather, just like any other pair of best friends, Linc and her friend discuss break-ups and hookups and go on double dates, etc.

Recommended for: teens
Red Flags: one character steals his parents pot lollipops, which he and Linc then eat.
Overall Rating: 4/5 stars

Read-Alikes: Letting Go of Gravity; You'll Miss Me When I'm Gone; The Language Inside;
Posted by Jenni Frencham at 12:00 AM